School is finally into a regular schedule, and it’s official: my Tuesdays are awful. Sure, I only have one class on Monday and Thursday, and I get Wednesday and Friday off, but I definitely pay for it with Tuesday. I have class from 12:30-10 with only an hour for dinner. Yeah, that’s right, 10pm. Last Tuesday, classes were cancelled, and the Tuesday before that was the first week and only two of my classes met, so yesterday was my first real hell day. I was absolutely exhausted by the end! And I thought I had packed enough food with an apple and some crackers, but my stomach was growling the whole time.

Last post, I talked about the Ten Thousand Buddhas Monastery, which literally has over ten thousand Buddha statues. As a follow up to that, last Friday I went to the Big Buddha. It’s literally a gigantic Buddha. They’re not very creative with names here, I think. Either way, it was awesome.

It’s way up on the mountain in Ngong Ping on Lantau Island. The subway doesn’t go that far, so after that you can either take a bus or go with the more exciting/expensive option: cable cars.

(I say expensive, but really it’s only about $150HKD roundtrip, or 20 bucks for the fans back home.)

If the cable cars weren’t cool enough, you can pay a little extra to ride in a crystal cabin. What does a crystal cabin entail, you ask? Glass. Floor.

Those are my stylin’ Birkenstocks, if you were wondering.

Anyway, once you get there, there’s plenty to do. The cable car lets off in Ngong Ping Village, a ridiculously touristy area of shops where all the buildings are made with stereotypical Chinese architecture – think Disneyland’s Main Street but Asian. They did have a shop filled entirely with vending machines, which was awesome! Not like food vending machines, but the kind where you put in a coin and hope/pray the little plastic ball that comes out doesn’t have something lame inside. I got a couple of ridiculously adorable cell phone charms.

Besides that, there’s plenty to just look at. There’s the Po Lin Monastery, where lots of people were praying, burning incense, that sort of thing. Plus there were tons of flowers, which I love, and I was able to snap a couple National-Geographic-esque shots: 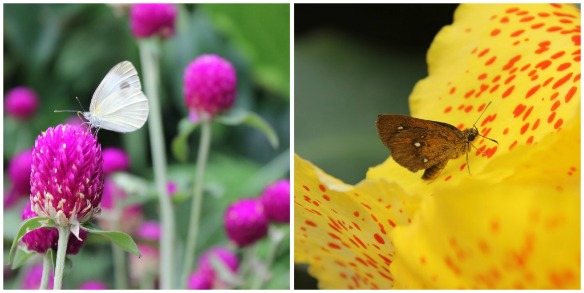 At the monastery they have an all vegetarian restaurant. Yes, that’s right. All vegetarian. I can’t even explain how happy that made me. I had asked a friend – a local – why it’s impossible to get tofu at a restaurant here. He said, “Are you kidding? Tofu is cheap! No one goes out to eat and orders tofu!” Well, the monastery is my new favorite restaurant. It’s a set menu based on how many people are at your table, but everything was delicious. I haven’t seen so many vegetables on one table since I got here! There was an all-veggie soup, a cauliflower dish with fried tofu, bell peppers and cucumber with something very similar to Tofurkey, curry with corn and soft tofu, veggie spring rolls, mushrooms with bok choy… I was in tofu heaven. 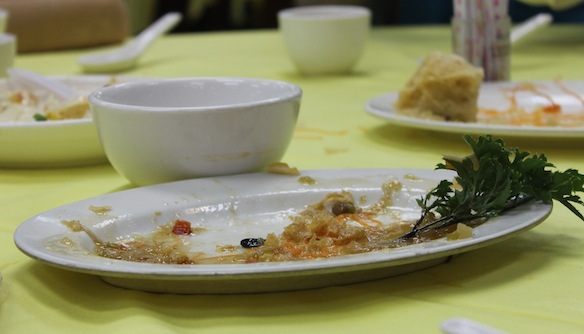 After that, finally, what I had been waiting for: Big Buddha. You have to climb about a million stairs to get up to it, which is actually really awesome because it looks bigger and bigger the closer you get. I’m not kidding, this thing is huge – over a hundred feet tall. And since it’s way up on the top of the mountain, you can see it for miles! Pretty crazy.

At the very top, there are six smaller (but still pretty big) statues circling it, giving offerings of flowers, fruit, and other things Wikipedia tells me are necessary to enter nirvana. 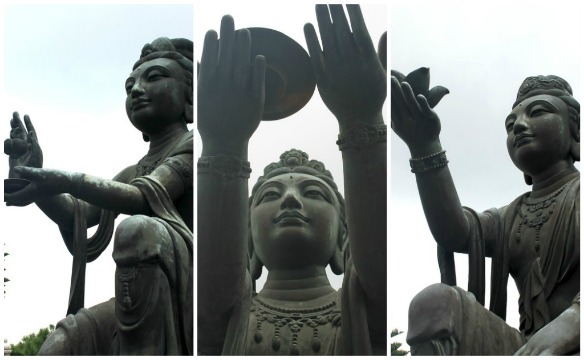 Then on Saturday I made a complete turnaround from Buddhist temples and went shopping. Considering my bargaining skills are unbelievably poor, I think I did pretty well for myself – shorts, a shirt, a belt, sunglasses, a wallet, and a reusable grocery bag for under $50USD. Mong Kok is the best.

After that we went to Pui O beach (again on Lantau) for a concert-type thing at a bar right on the shore. I felt like, just for that evening, I left Hong Kong and was back in California. The band playing when I got there was really great – calm, beachy music, very appropriate for the occasion. The sand on the beach was the softest I’ve ever felt on my life, and it was so relaxing to stand with my feet in the water and listen to the music in the background. The band that came on after that was pretty terrible, but at least I still had the waves! I definitely want to go back to that beach in the daytime.