I am officially back at CMU. Crash course in Maya (a 3D graphics program) means I’m living in the computer cluster, and when I’m not I’m either doing Chinese homework or in dance rehearsal. I have no life! Yay!

I’ve realized that cooking is hard. I like cooking when I have a lot of time and a fun recipe to try, but that’s almost impossible. With my schedule, I usually cook my dinner when I wake up in the morning and take it with me to school, because I don’t come home until 10pm at night. I have breaks during the day but I live way too far away – it’s not worth it to go home. Also, cooking without a fully stocked kitchen is really tough. All the time I’m freaking out, ugh I don’t have garlic! Why didn’t I buy peas? I need tortillas! Life is hard.

A really good friend of mine lives downstairs from me, so Saturday morning we made pancakes for breakfast. Just out of the box, because we were lazy, but they were good. Next time we’ll throw in fruit or chocolate chips or something. I think we’re going to make breakfast a regular thing, so expect some yummy breakfast recipes coming your way soon.

Today I had a bit of free time (free time? what is that?) so I decided to try out a cool recipe I found on Pinterest. I love fried cauliflower, so I thought this might taste similar but with less work and less oil, and it did! They’re like healthy, guilt-free french fries. Unfortunately all the cauliflower on the right side of the pan got a little burned, so I think my oven has a hot spot. Also, next time I think I will turn down the temperature a little bit. Also also, I didn’t have nearly as much cauliflower as the recipe called for, so I eyeballed the amounts a little. For this though, it really doesn’t matter. 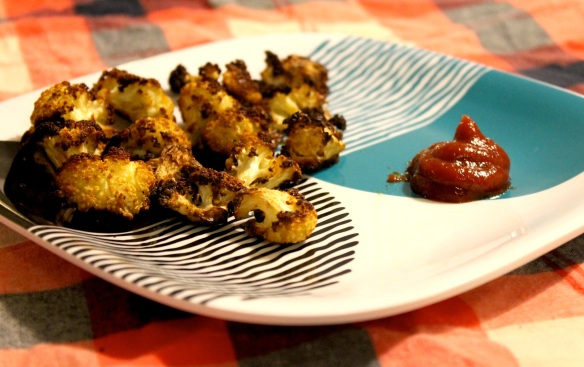 Instructions
1. Preheat oven to 400 degrees (next time I’m going to try 375).
2. Wash and cut the cauliflower (or be lazy like me and buy it pre-cut).
3. Mix olive oil, salt, pepper, and cumin in a large bowl. Throw all the cauliflower into the bowl and mix until leach piece is evenly coated. Don’t be afraid to get your hands dirty.
4. Spread evenly on a baking sheet covered in foil. Bake for 45min to 1 hour until browned, turning each piece over every so often for even crunchiness.
5. Serve, preferably with ketchup. I’m much more of a mustard girl, but I definitely say ketchup for these.