Last weekend my dad and brother were here visiting my school, so that was really great. We did a bit of sightseeing around Pittsburgh, went to the Andy Warhol museum, saw Hunger Games (a second time for me), and went out to eat… a lot. In three days with them we went out to eat four times. I never eat at restaurants that much, and I was feeling kind of gross afterward. I really don’t understand how some people can do that all the time!

For brunch on Saturday, we went to Pamela’s, which if you’re from Pittsburgh you know has the best breakfast in the entire world. If you’re not from Pittsburgh, you should be sad you don’t have Pamela’s. I was afraid I talked it up too much and my family would be disappointed, but they were just as impressed as I said they would be.

They’re famous for their hotcakes, which are about halfway between a pancake and a crepe. I need to figure out how they do it! I had some stuffed with apples, my brother had them with strawberries, and my dad had French toast.

I actually had two weekend breakfasts – I cooked with two friends on Sunday. Yes, that’s right, we added a new member to our breakfast club! I wasn’t entirely satisfied with the result, so I’ll skip posting the recipe. If you’re curious though, we made German pancakes.

Instead, I’m going to explain how to prepare an artichoke. I absolutely love artichokes, and would be perfectly content to eat one everyday. They were on sale for a dollar apiece at the market last week, so I got one and had it over the weekend. I was a bit intimidated by it, but preparing it is really easy.

First, start by tearing off some of the petals from the bottom and slicing off most of the stem.

Then, take your kitchen shears and cut off the tops of the petals where they have that annoying little thorn. Just do this for the bottom 2/3 of the artichoke, and then slice off the whole top third. After it will look like this:

Then, rinse the whole thing, making sure to get water in between the petals. Put it in a glass bowl in about 3cm of water, cover with plastic wrap, and microwave 5-7 min until tender.

Then eat!! Pull off the petals and scrape off the meat on the inside with your teeth. You can dip it in melted butter with some lemon pepper, which is amazing. I didn’t have any lemon pepper, though, so I dipped mine in pesto! 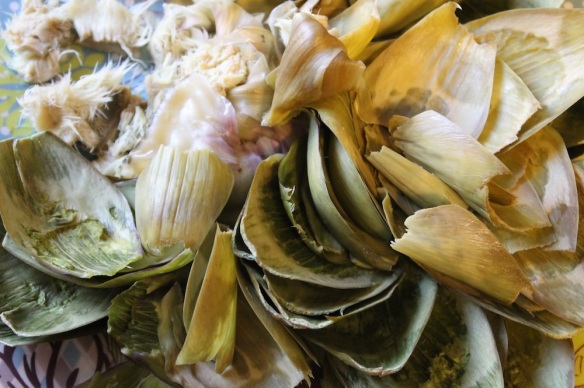