We all survived the typhoon, hurray! The rain wasn’t even that bad, it just got really windy. A couple of trees near the dorm fell over, but that’s all. Another one is supposed to be coming, I think, but I think it’s going to stay even farther away from Hong Kong than the last one did.

On Friday, after all the typhoon business blew over (hahaha) I went hiking on MacLehose trail, near Sai Kung. It was a perfect day for hiking: warm, but a little cloudy so the sun wasn’t beating down on us. We got caught in a bit of rain toward the end, but it was okay. The trail is over in New Territories, and has some of the most beautiful scenery I’ve ever seen.

It takes a little over an hour to get to Sai Wan beach, but the trail is super easy – just like the last time I went hiking, it’s a paved sidewalk almost the whole way. Sai Wan is also beautiful, and split in two parts by a big section of rocks. It’s pretty strange – one side is very clean, but the other side has trash all over the sand. It probably washes up there from other beaches or people dumping from boats… really sad.

After the beach, we veered off the path to get to what we were really looking for: Sheung Luk Stream. It’s got a couple pools, but the one at the very top is both the cleanest and the deepest.

If you climb up to the top of the rocks, the jump is about 20 feet. It took me a bit of convincing, but eventually I mustered up the courage to do it. Oh my god, it was amazing. The water was cool and refreshing, and I got such an adrenaline rush from the jump! Afterward I just kept saying over and over again, “I can’t believe I just jumped off a cliff.” Then I did it again.

To cancel out all of that physical activity, I had plenty of desserts this weekend. On Saturday, I went for dumplings with a local friend, and then afterward we got dessert. He went for grass jelly with fruit, while I chose what translates to “ice flower.” It’s sort of like halfway between ice cream and shave ice. So light and refreshing! I got strawberry, but they also had mango, chocolate, durian, and Yakult. The place was right by school, so I will definitely be going back.

After that – FIREWORKS. October 1st is China’s National Day, and Hong Kong had the most amazing fireworks display I’ve ever seen in Victoria Harbor. Seriously, the entire sky was filled with fireworks for 20 minutes straight. I’ve never seen anything like it! They even had fireworks that formed the characters 中国 (China), but I couldn’t get a good picture. Apparently they spent something like $8,000,000HKD on the whole thing. Crazy. Also, the whole area by the water was PACKED. Seriously, the sidewalks were completely full and they even closed down the streets so we could stand there, it was insane! 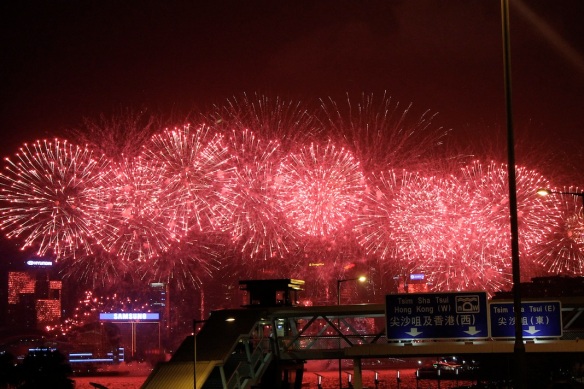 Have you ever heard of rice pizza? Me neither. Today I went with a friend to a mall in Sha Tin and we had rice pizza for dinner. It’s literally just pizza but with rice instead of crust. She had been there before, but I had no idea what I was in store for. It was really good! One of the most interesting things I’ve ever eaten. And not nearly as filling or fatty as regular pizza, either. We got one with salmon and mushrooms, and one with chicken and mango. The salmon one was kind of cheesy, but I don’t think the chicken one had any cheese at all! I liked that one better. Mostly just because I love anything with mango. I couldn’t figure out how they get the rice to stay like that, though, because it’s not super sticky or crunchy or anything. Food mysteries. 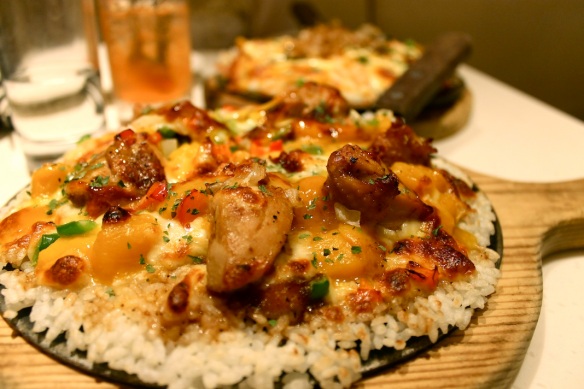 After we stuffed our faces with the rice pizza, we walked around the mall until we were hungry again for dessert! We went to Honeymoon (not the same one as last time) and it was soooo delicious. I think other people had the same idea as us, because that place was hoppin. Seriously, the rest of the mall was pretty empty by that time, but Honeymoon was packed. Everyone wants dessert!

We got a “mango pancake,” which was a little dumpling-type thing with fresh mango and whipped cream inside, an icy sago soup with fresh mango, bananas, lychee jelly, and green tea ice cream (I love their green tea ice cream!!), and warm peanut/sesame tangyuan in black sesame and walnut soups. In the picture on the menu, the bowl is split diagonally with half black sesame soup and half walnut. I think they were rushing a little in the kitchen since it was so busy, so unfortunately our soup came a little bit mixed together. It still tasted great, but I really wanted to taste the walnut soup on its own! There’s always next time, I guess – makes for a great excuse to get more dessert! 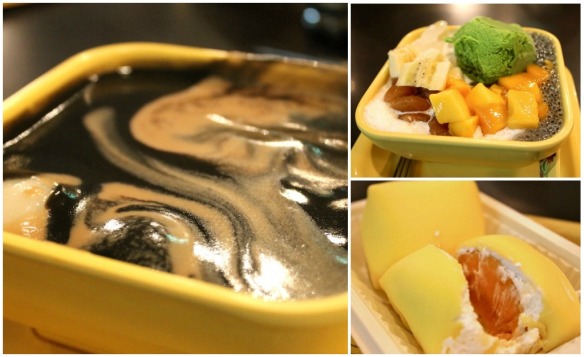 I’m gonna come home super fat if I don’t slow it down with these desserts. Seriously.

Finally, I have my first class today. Artificial Intelligence from 6:30pm-10:00pm. I can’t believe how late classes go here! It’s ridiculous. My evening classes are already making me miss out on things, like the exchange student dinner tomorrow. Bah. If it weren’t the first week, I would ditch.

The past few days I’ve been having a lot of foods reminding me of home. I’ve gone out of my way to eat simple things like sandwiches. It’s not that I’m really tired of Chinese food or anything, I just need some variety! Every meal seems to be a choice between rice or noodles. There is plenty more Chinese food I need to experience! I haven’t really had dumpling soup or dim sum or anything like that, and I’m getting tired of constant noodles.

The other day we went to a burger place called BLT. To be honest, it wasn’t that great. I had a falafel burger (vegetarian yes!!) that was only so-so, and the fries tasted kind of McDonald’s-y. What was amazing though was the milkshakes. Let me just start by saying that being of age is amazing. I’m only 20, so I can’t drink at home. Not that I’m dying to go get drunk every night, but sometimes you look on a menu and the drinks just sound amazing! Because of that, I’m definitely taking advantage of my age while I’m here. I ordered a milkshake, called Silk Road, made of Kahlua, Bailey’s, espresso, and coffee ice cream. That thing must have been over 1500 calories, and I enjoyed every last drop of it. It’s something I can definitely make on my own, too. Yum.

Another taste of home I had this week: frozen yogurt. Froyo is such a big deal here! It’s actually very inexpensive too, considering most dairy products are pretty costly. There’s a Tutti Frutti pretty close to my dorm. I’ve seen it at home but never had it (I’m much more into Yogurtland or Menchie’s) so I’m not sure how the flavors compare, but it definitely had some unique options. I got half guava and half red bean yogurt – the guava was to die for but the red bean was only so-so. Then, as I usually do, I only topped it with fruit and mochi, plus the little jelly things you can get at bubble tea places. They had dragon fruit! If you haven’t had it before, it’s that hot pink scary looking thing but it’s white inside with black seeds. It tastes a little bit like kiwi, but less sweet.

The other day, my roommate went over to Macau for the day. Macau and Hong Kong are the two Special Administrative Regions of China, meaning they belong to China but are separate for the time being. The ferry to Macau only takes about one hour, so I definitely have to go! Anyway, she brought me back some “cookies”… 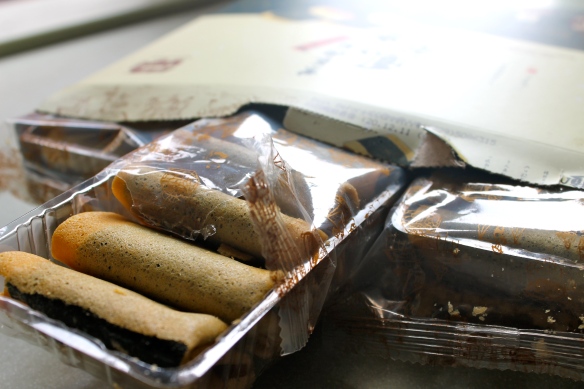 They look like normal cookies, right? Crunchy outside with maybe a chocolatey filling or something. When I looked at the box more closely, I realized they weren’t cookies at all. It says “Phoenix Egg Roll with Seaweed and Shredded Pork.” Not a cookie. I ate one though – very interesting. I know it says pork but they taste extremely fishy. Nice to try, but I don’t know how I’m going to finish the whole box.

Yesterday I went to Repulse Bay, a beach on Hong Kong Island. It was so nice! Everyone says that beach is so dirty, but honestly, compared to LA beaches it was ridiculously clean. Very little trash. Afterward we went to this fantastic Japanese restaurant in the Tsim Sha Tsui subway station. It’s crazy, almost every subway station here is its own little shopping center, with tons of places to eat and small boutiques. The TST one is a full mall with multiple floors, clothing stores, and sit down restaurants. This was a trendy place called Miso Cool. Not too expensive and absolutely delicious! I will definitely be going back. 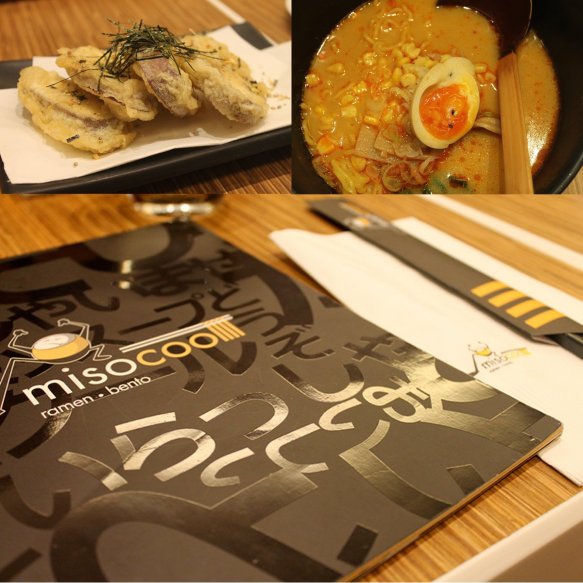 I’ve been trying to eat more meat for a more balanced diet, so I decided to go with spicy ramen with shrimp tempura. It was delicious! I haven’t had anything spicy since I got here, so the ramen really hit the spot. It came with corn, a bit of bok choy, and half an egg on top. The tempura had two shrimps plus one piece of eggplant and one piece of squash. It was really great, not too greasy or anything. And the presentation was so cute! All of us were gawking when our food came out. There’s a little picture on the inside of the bowls, and they’re all different. They also have some interesting smoothies, like green tea with Yakult, that I’ll have to try when I go back.

Oh, and one strange thing I’ve noticed here: The Chinese drink 紅茶 or 綠茶, which translates to red tea and green tea. The only problem is that when they say red tea, what they are actually talking about is what we call black tea. Since this bizarre translation was already explained to me by my Chinese teacher this year, I wasn’t surprised by it, but I know a few people were a bit confused. When my friend and I both ordered red milk tea the other day, I knew exactly what I was getting but she thought she was trying something new!

Hey there! I'm Alyssa, a vegetarian 20-something with a passion for baking and sharing my creations.